So we are four weeks into our ski season and Christmas and New Year seem far behind us. Our season began back in early November putting the finishing touches to the chalet and testing out new recipes as we finalised our dinner menus with Pete the chef. Then we held our breath and waited for the snow and guests, hopefully in that order! Fortunately, both arrived in spades and since then Graeme has been putting his new toy, a snow blower, to the test clearing the drive and pathways leading from the chalet.  Although it means an early start to the day and over an hour of hard labour before heading to the kitchen to cook full English breakfasts all round, it’s strange that he won’t relinquish the task despite several offers of help.  There is obviously much satisfaction to be gained from tinkering with a temperamental engine and spraying snow into neat sculpted banks with his multi-directional chute. Now I’m not sure when we have a new dump of the white stuff whether his excitement is for a day’s boarding on the slopes or his dawn snow-clearing duties!

Thumbs up to the Bardonecchia Comune for bringing a new and exciting event to our pistes next weekend. The second stage of the Paraski Europacup 2013 will take place at Melezet from Friday 25th-Sunday 27th.  Competitors take part in two distinct disciplines, with six parachute descents from a helicopter landing on a small target zone coupled with two giant slalom races. With teams from Austria, Germany, Slovenia, Czech Republic, Italy and Switzerland it will be a truly international event and the town will be buzzing. 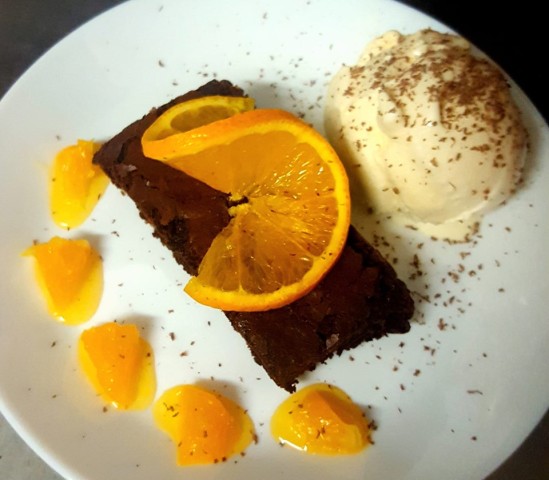 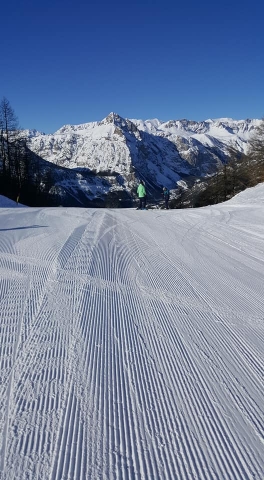 This was for most of our party the first time skiing in Italy and this chalet was such good value we wondered where is the catch? Well the answer is there isn’t one… The chalet was always warm as was the welcome. Catered ski chalets are unusual in Italy (why?) so this place is a real winner. I can’t get over how cheap Italy is compared to France! We will definitely be back!”
Charles C Bristol

“Our third stay at Pensione Bianca once again exceeding our expectations – our experience has improved with every visit. Kate, Graeme and family can’t do enough to make guests feel welcome and go above and beyond to assist with holiday arrangements…They make the whole experience super easy. The chalet is homely, comfortable, very clean and the food is beyond excellent. ”
Lisa A.

Great place to stay with family and friends

This was our first trip to Bardonecchia and the Chalet Bianca. Our hosts, Graeme and Kate, could not have been more helpful with great communications throughout the booking process which involved numerous changes of numbers etc. They organised our lift passes and ski hire ensuring we were on the slopes on the day we arrived. Accommodation was spacious and clean, and the storage facilities for ski equipment was very helpful.
The food was consistently excellent and thanks to Mike and Jenny for dealing with various dietary requirements extremely well.
The atmosphere in the chalet was friendly and sociable, Graeme and Kate were able to answer loads of questions and make great suggestions for things to do and where to ski.
The chalet is very conveniently located, very close to the town centre and within easy reach of the skiing areas. There is a free ski bus and Graeme offers a great shuttle service.
We will be back again to enjoy this great catered chalet experience.

We have just returned from a trip to Pensione Bianca having had a wonderful holiday. Our room was a good size with a lovely comfortable bed and a small but well equipped shower room with loads of piping hot water for after skiing showers. There is a comfortable lounge area where guests can relax and storage for skis etc in the basement.

The best thing about this hotel is the team looking after you, nothing is too much trouble. Arranging our transfer from the airport, shuttling us to and from the slopes and providing delicious food and wine including catering for our quirky eating habits without any problems. Thank you Kate, Graeme, Jenny and Mike for a memorable holiday.

Our large group of six families, including 10 children just came back from a wonderful ski trip at Chalet Bianca. Our group is fairly particular when it comes to our accommodations, but Graeme, Kate and their amazing team exceeded everyone’s expectations. From the amazing dinners, made-to-order breakfasts, shuttle to the lifts, walking distance to the slopes, easy and flexible babysitting, and top-notch staff, I can’t say enough good things about our holiday. Thank you for your attention to detail and kindness. Everything was perfect.

We are so glad to have found Kate and Graeme’s catered ski chalet. We rented the entire chalet for our group of families. They coordinated lift tickets, gear rental, and ski lessons for the kids. It is walkable to the train station and the ski lifts, but Graeme was often available for a ride. The meals prepared by Mike and Jenny pleased the adults and the pickiest kids in the group. Afternoon coffee/tea and cakes were so nice in the afternoon. Great local wines were served with dinner. The rooms are large, bathrooms are en suite, and a family room is great to relax at the end of the day. Thank you for a great ski trip. We hope to return.

We stayed at Chalet Bianca with friends and loved the whole experience. The rooms were very comfortable, food was great and nothing was too much trouble. Graeme and Kate’s knowledge of the area and all things skiing was vast and the home made cake for my daughters’ 7th birthday topped it all off! Would recommend to anyone and really hope to return!

We stayed here as a family of 4, 2 adults and 2 children (12 and 10) for a ski holiday in February half term 2018 after it was recommended to us by a friend, and they were completely right in their recommendation.
The family room was brilliant, very clean, lots of space, light and airy, an interconnecting door and two bathrooms.
Kate and Graeme were really friendly and helpful, organising the kids’ ski lessons and coming with us on the first morning to make sure it all went smoothly.
The food and drinks were all tasty and plentiful, and the small lounge area provided a sociable space to catch-up with the other guests and hear about their adventures (and watch the Winter Olympics!).
The short lift each morning to the slopes with Graeme was much appreciated! Not that it was far to walk.
Whilst there is ample space in the boot room at the chalet, we found it easier to hire a locker at the equipment shop and store everything there.
Our fourth family ski holiday and the best place we’ve stayed so far!